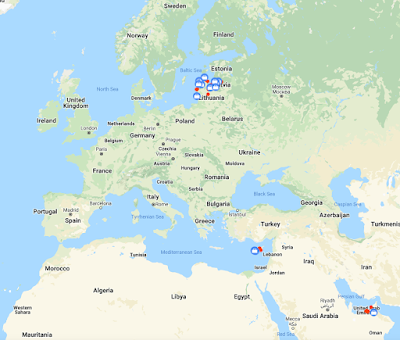 2020 is finally done. It hasn't been one of the world's best years in my lifetime, even though it's been relatively good for us. I'll continue my travel blog tradition of looking back on last year's travels. I tried packing some week long trips into the winter to get away from the dark and cold. We made 2 of the 3 planned trips out of Latvia before the year took an unexpected turn.
Latvia is locked down this winter with curfews at night to slow the spread of the virus. This is what travel looks like now. 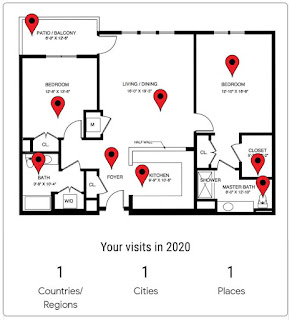 It's nice to look back on early 2020 when everyone had freedom of movement around the world. We actually went to a few places before travel restrictions became the new standard.

We visited Abu Dhabi in January to enjoy their perfect summerlike weather. We enjoyed a good bit of the United Arab Emirates in a week's time. They have (or had) direct flights from Riga and probably many other parts of Europe, so it's a good winter getaway with lots to do.

We went to Cyprus in February and enjoyed their off-season. The Paphos area was good for our interests. I enjoyed avoiding the summer crowds and don't mind mild or colder weather at the beach. I think most people can skip Nicosia and stick to the coast any time of the year since you won't be missing much.

We enjoyed Malta much more during the previous winter if you're deciding between the two island countries for some reason. Malta might be worth a repeat visit. I remember COVID making the news while we were in Cyprus. It seemed to be an "elsewhere" problem creeping closer to us every day by the time our week was over.

COVID finally decided that we didn't really want to visit Vienna in March. That would have been the last stop for my planned weeklong getaways every month for 3 months. We dodged a major problem when our flights were canceled. Luckily that happened a few days before we were supposed to go instead of during the trip. The timing could have been much worse if we were checking into our hotel as the city announced a shutdown. Our flights were rebooked for late summer and then eventually canceled for a voucher.

Summer was better for travel as the season cautiously limped along with a lesser pandemic. Some of the restrictions loosened as everyone figured out how to live in this new environment. Some flights resumed, but we decided against flying around for leisure. There's still the risk that we inadvertently cause someone else's death even if we don't get very sick ourselves. We're waiting to become vaccinated before we even think about flying for purely selfish vacation purposes.

I bought a car to avoid public transit, so we decided to take a week and various weekends to get more of a deep dive in this wonderful little country of Latvia. The daily COVID case numbers stayed under 10 for most of the summer so it was fairly safe here. There's lots of cool stuff outside of Riga if you have the time during a visit. If you get to live here for a while like we do then make the time. Do it!

So, there's our travels of 2020. I'm grateful that our lives were good in contrast to some of the end of the year reviews out there. Death to 2020 on Netflix is one example. It was funny, but it's also a tragic kind of funny. The overall reality of the year wasn't so great for so many people. We've been lucky.

"A long December and there's reason to believe maybe this year will be better than the last."

Email ThisBlogThis!Share to TwitterShare to FacebookShare to Pinterest
Labels: vacation