This was a fun week of training because it was an entirely new subject I knew very little about. We learned about operating HF radios including how the HF transmissions actually work. We'll mostly just use the radios but we also learned a little about installing them and maintaining the antennas if that's ever needed. 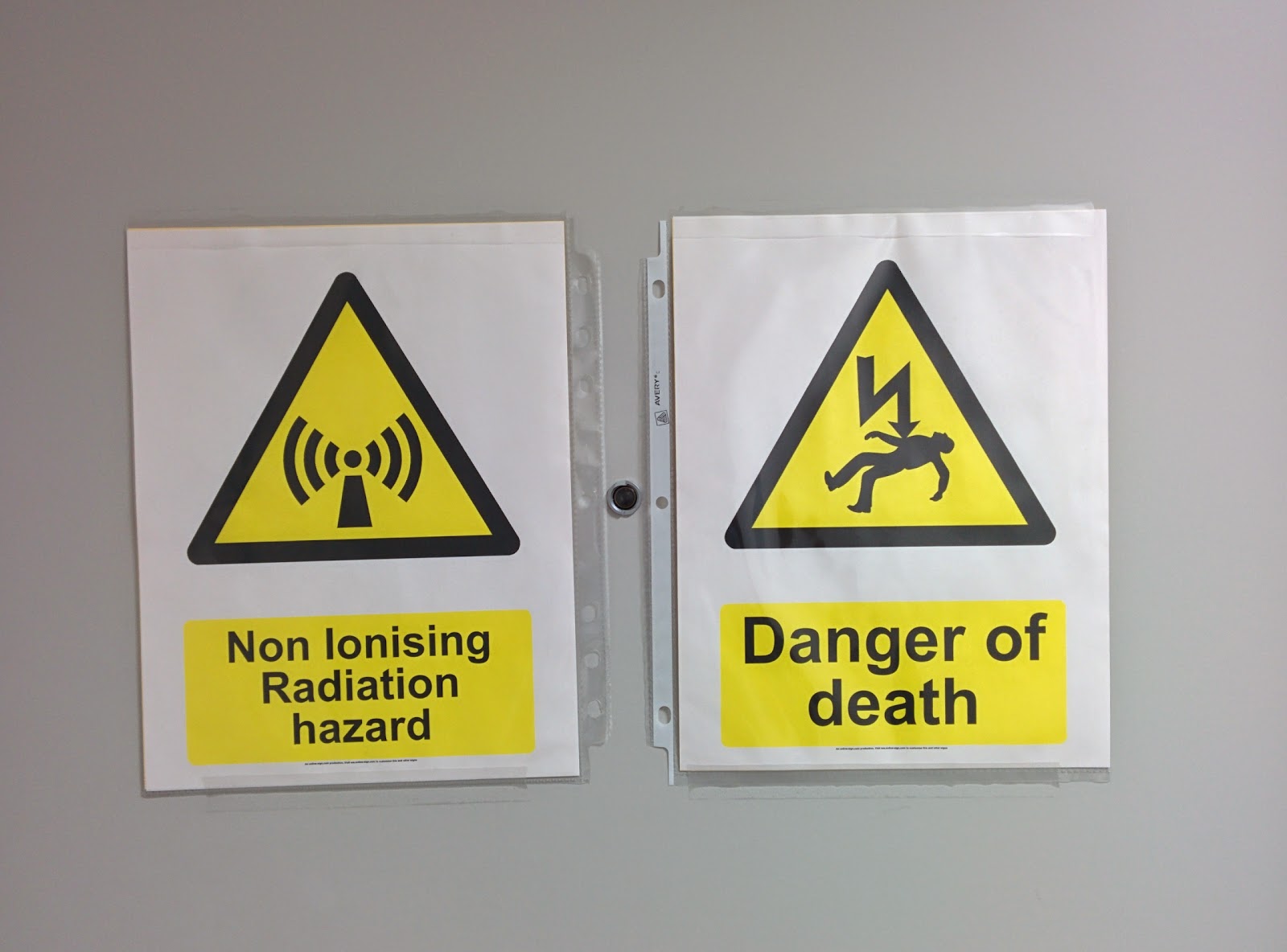 Now I know a few things about radio propagation and the mysterious forces around us that may or may not let us talk to someone really far away. Some of it depends on the atmosphere, time of day (the ionospheric layers are different at night), and the effects of the Sun. Our instructor also said it takes a bit of luck or magic (he called it the Walt Disney Effect) to establish a link. I now have a better understanding of why amateur radio operators get so excited about making contact with skywave across long distances.

The picture is of the signs on a radio classroom (another door near my classroom but the signs are the same). Since we were working with electricity and non-ionizing radiation from the radios and antennas there was obviously some focus on safety. It's not really as dangerous as the signs look as long as you don't mess around with the antennas while transmitting and you've installed lightning protection on the antenna line. You should always be careful with electricity and use proper grounding.

The "danger of death" can happen with any high voltage so that sign could be put up almost anywhere. My wife had an experience with lightning traveling down a phone line. Lightning also hit a metal fence outside our son's bedroom when he was a toddler so that sign should be everywhere! The lightning strike near our son set off all of his electronic toys like that one scene in Close Encounters of the Third Kind. I don't think there were too many lasting effects on him. ;-)

Anyway, through the week we talked on the radios, crimped on some cable connectors, and even went on the roof to check out the antennas connected to our classroom equipment. We get a good dose of "enough to be dangerous" for our jack-of-all-trades and master-of-none type of job.


Moving from House to Apartment to...

During this same week we moved from our house into a 3 month lease apartment. My wife handled a lot for the move since I can't miss training. Fortunately, she could take off work for 3 days so I only had to bust my butt on it after training and on the weekends. 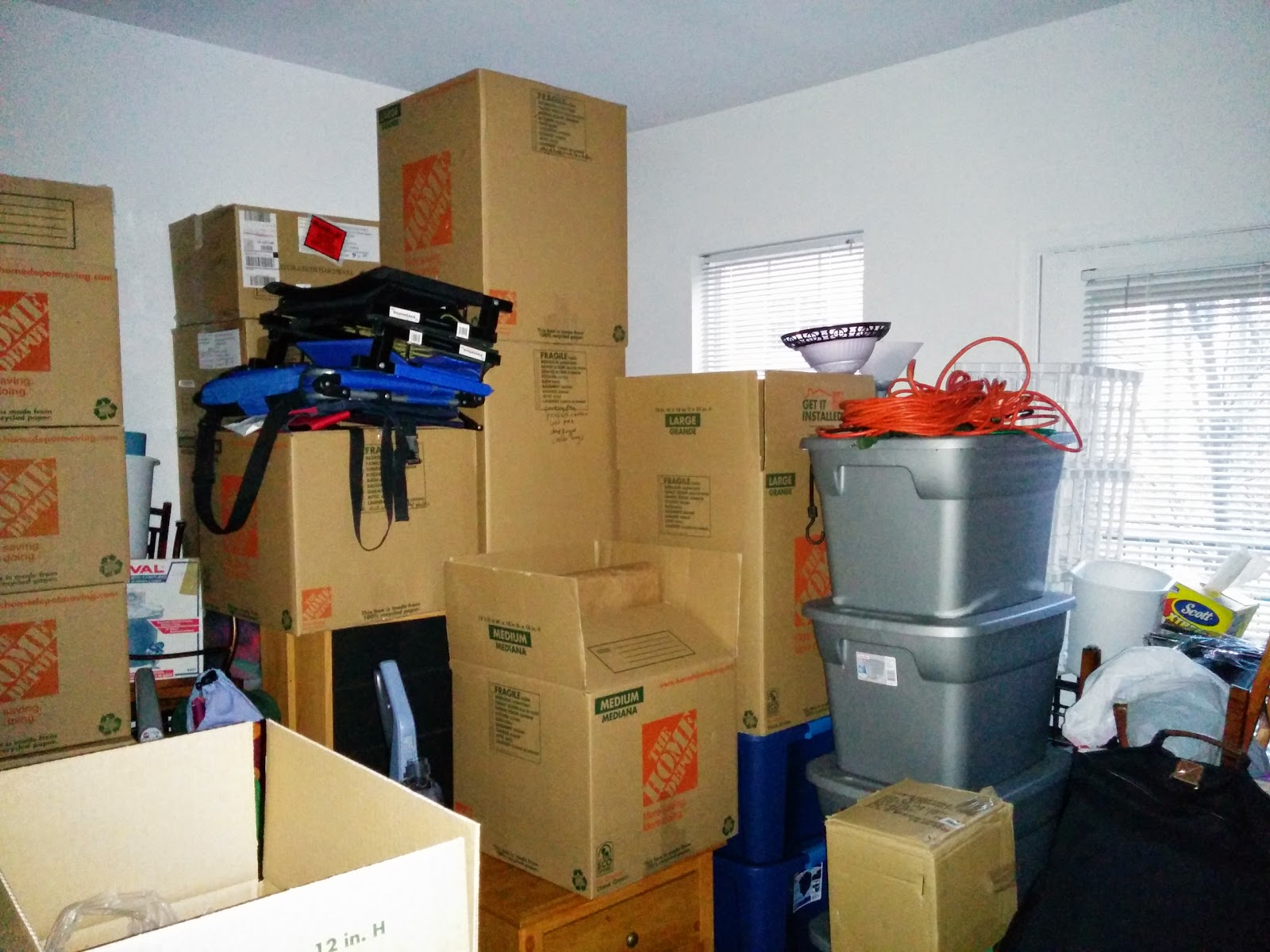 We boxed up most of the house for a couple of weeks before the move. We hired a moving company to move the furniture and whatever we had boxed up. Even after that we still had to make probably a dozen trips with the SUV to get various things not boxed or too fragile that we didn't want them to move it. We only packed them good enough to move a mile in a car instead of stacked in a big truck by people that don't care as much about our breakables. We'll probably unbox stuff as we need it until the day the next movers come to pack it all up for long-term storage or headed for Sweden.

We still have way too much stuff for our apartment in Stockholm. A lot of that stuff in the 3rd bedroom picture above (including a walk-in closet full of boxes you can't see) will end up in State Department's long-term storage. We won't have room to put up the guest bed buried in there somewhere if we don't store a bunch of junk. It does make me wonder how much stuff we really need and how much we unnecessarily hold onto throughout our lives. We got rid of a lot over the last month but we're still surrounded by boxes!
Posted by Jeff 1 comment: