San Diego and Back Again

We drove from my parents' home near Ft Worth TX to my son and daughter-in-law's in San Diego CA and back again. We saw a lot of the southwest region doing it that way. This was definitely a good way to spend home leave, visit some family, and really experience home in a variety of ways. Here's a few pics of San Diego, Las Vegas, and the amazing Grand Canyon. I highly recommend the Grand Canyon for any bucket list. It's an amazing treasure of our home to visit on home leave.

Some of my new hire classmates pointed out that home leave expenses are tax deductible. We need to keep all of the receipts as supporting documentation for this. It still seems odd that driving to visit family, eating, and staying in hotels would be tax deductible (only for the employee) but that's what the IRS says:

The AFSA Tax Guide is another good resource for this information with tips about keeping a travel log. 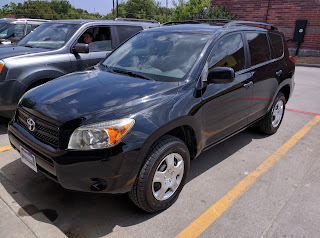 Spending patterns don't just change because we live in spare bedrooms and hotel rooms during home leave. I didn't need a car in Sweden but will need one in Venezuela, so I bought a cheap used car when I arrived in the U.S. to ship to the next post. I wonder how many car changes will be needed over the years as import restrictions and opposite side driving changes vehicle requirements from post to post. Well, at least I have something for all of the road tripping I've planned for this home leave. I'm sure next time it'll need to be a rental car for this part so that'll be another budget item next time.

I've heard some people hate the required home leave because it's an expensive forced vacation. However, I love to have more free vacation and we all know it's coming so it can be budgeted for like any other expense. It's also another area where you need to expect the unexpected. I had to take an eye test to fix my driver's license in Texas and discovered I need glasses for driving. There's a few hundred dollars more I didn't plan to spend on glasses.


Even if you haven't saved up enough money for home leave, there's another way to tap your future pay besides credit cards. I found someone's blog post from 2008 about Advance of Pay and it also talks about the Foreign Transfer Allowance. They wrote: "Within 45 days before and 60 days after arriving to post, you can get up to 6 paychecks up front. You should take this loan in ALMOST EVERY CASE." I would add it makes sense if you're going to a high differential pay post where you may not be able to spend your money as easily and/or need to buy consumables and a car like I do. I'd pay off those expenses from future pay anyway so why not pull some of that pay to the present? If I was going to a higher cost of living post or a post with little or no extra allowances then this may not be a good financial tool. Either way it's good to have this option for an interest free loan of your own money.

An update to their instructions is to just fill out one JF-55 and scan it to the PayHelp email address. They were quick to add it to my paycheck and after another paycheck they started taking out the repayment, so be ready for reduced pay during home leave if you do it before leaving post. That's on top of losing any allowances you may have at post that don't get paid during home leave. I didn't request too much of an advance since it's a big chunk of a paycheck to take 6 paychecks and pay them back over 18 paychecks. But hey, I'm going to a 30% differential post so I can use a bit of that in advance.
Edit 2021: This request was migrated to the DS-4315 form in myData.

The other thing I'm thinking about is just being mindful about my spending. A thought keeps creeping in that I don't know when we'll be back to the U.S. for this or that unique thing or food. It's tempting to just go crazy and do whatever we want. I have some broad budget targets in mind for home leave so I'm going to try to stick to that as much as I can. I don't usually have the consumer Christmas financial hangover like many Americans experience so I'll probably be good in this area.
Posted by Jeff 1 comment: