I arrived in Stockholm a year ago and this is the halfway point for my first Foreign Service post. My bid list was submitted this week for next year's move. Everyone in the Summer 2016 Entry Level Specialist (ELSPEC) assignment cycle should find out by Thursday where our next directed tours will be. Our class has stayed in touch so there's a small group of us around the globe collectively holding our breath until those emails arrive.

I think I prefer getting an email instead of having a flag day ceremony. I'll get a private moment to digest the information instead of having it shared with everyone like some game show. "Come on down! Your next 2 years will be in exotic..." It was a memorable ceremony and I was happy with what I got but I think it was a little torturous to sit through. However, each work email this week might end up being torture too because any one of them will contain my fate for 2 years of my life. I guess it's game show time again!

Glad Midsommar or Happy Midsummer! We had a few good weather days recently but apparently it's a traditional Swedish Midsummer if it's cool and rainy. So here we are with 56F and drizzly rain all day to celebrate the beginning of summer. The official longest day of the year will be Sunday with a 3:31AM sunrise and 10:07PM sunset. It doesn't get to full night and only reaches nautical twilight this time of year. 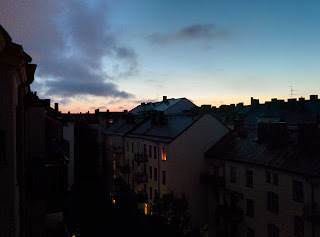 I'm approaching my 1 year anniversary of arriving in Sweden. Times going fast and I've just received the bid list from which I'll try to pick my 2nd directed assignment. After that it's a more open bidding system where people lobby the posts with job openings and try to convince them they want you there. It's almost like applying for a job each time you move. In contrast, directed assignments are decided by our Career Development Officer (CDO) considering our rank ordered preferences we submit along with any special family needs and maybe a dart board or some other random selection device. Apparently there's a little art to the science of slamming a list of people into a list of posts.

This is the Summer 2016 cycle where all of us at our 1st tour post starting between May 1 and October 31 2014 will have to move next summer. We had a big class of 23 people in the IMS specialty when I joined. Now we have a total of 42 jobs for 42 or less number of people. 42 is a nice number featured in my favorite book series: The Hitchhiker's Guide to the Galaxy. I've read all 6 books in the trilogy several times. Yes, it's a trilogy because Douglas said so. Anyway, we now have just TWO WEEKS to research and rank order the entire list of 42! There's actually just 38 distinct posts since 4 of the posts have 2 positions each. Just a week later I should know where I head to next...

There was a 3 day weekend for Swedish National Day so naturally we popped over to a nearby country we haven't visited yet. This time it was a quick and cheap 1 hour flight to Riga Latvia. We just stayed one night but got in early and stayed late enough to have nearly 2 days of exploring.

Riga has the finest and largest collection of art nouveau buildings in the world. They have a great looking old town with several town squares providing lots of outdoor eating and drinking areas. We rode a tour bus to see the popular areas and discovered the park by the Monument of Freedom was a beautiful place to hang out. We explored a huge market south of old town. Finally, we took a boat ride up and down the river to get a different view of the city even though it only went up to the commercial port and back for no apparent reason. The weather was nicer and warmer than Stockholm has been so we spent the weekend wandering outside. It was 76F in Riga on Saturday but it still hasn't cracked 70F here in Stockholm... and it's June now! 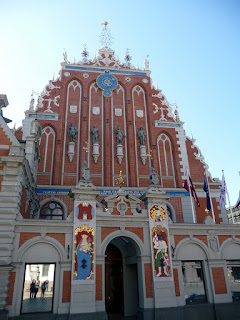