This Coldplay video for Up&Up includes some amazing visual compositing and looks a bit like a travel video. It's not one of their better songs and the lyrics are simple, but it's a fun video as we go up & up on the travel day tomorrow...
Posted by Jeff No comments: 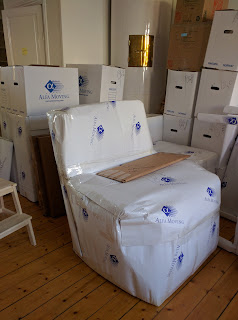 my recliner and other stuff for storage 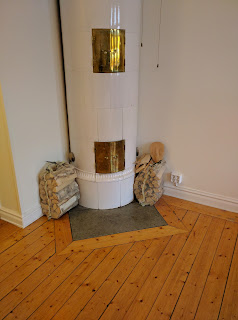 Sure, I wrote about sorting stuff 6 weeks prior to pack out. I usually think about things early but doing them is another story. The sorting really started the weekend before pack out and concluded while the movers were packing stuff in boxes. "Oh yeah, that... uh, send it to Mars. I've always wanted to launch some of my things into space."

It was a beautiful and warm day while they were inside packing boxes and wrapping furniture. The day was colder and rainy while they were outside loading it all in crates in a big truck. I've come to expect the bad with the good here when it concerns the weather. It's always best to focus on the good and the sun when it's out as a reminder of the eventual return of goodness. It doesn't look like it's today but there's always tomorrow. :-)

Pack out is done and we have 2 weeks of loaner furniture until departure. The furniture is Ikea of course. This is Sweden and there might be a law requiring it. Everyone's home must contain a certain percentage of Ikea products or they revoke your citizenship. The couch is comfy but I wish they chose one of the nicer models of the bed. The 32" TV is adequate but doesn't compare with my monster. Oh well, it's only 2 weeks and then it's on to many other beds in other homes and hotels across the U.S. before getting to the next assignment.

Who knows when or if all of this stuff will be seen again? The storage stuff is gone for at least 2 years. The rest could fall off a ship on the way. I've seen YouTube clips of that happening. At first I thought it was scary but then I realized it's just stuff. All of it can be replaced. The pictures are all digital and can be reprinted at any time. All of my favorite music, movies, and books can be streamed or downloaded again. Clothes, furniture, and housewares can be purchased again. It's a wonderful time to be alive when all of my stuff is entirely replaceable.

Now almost all of our stuff is entirely gone. We each have 2 suitcases and a carry on. It's about time to ramble on...
Posted by Jeff 1 comment:

Drottningholm Palace is an easy tunnelbana and bus ride from Stockholm taking at least 30 minutes depending on where you start. A part of the palace is the current residence of the king and queen of Sweden. It's much nicer than the city palace so I can see why they choose to live here. The house is nicer looking and the grounds are extensive and beautiful. You can walk around the outside for free so if you want another good park to hang out in then this is a great choice.

The temperature dropped again to the mid-60s but it was a sunny and glorious day to finally explore this place before leaving Stockholm. I can't believe it's now 24 days to departure and just 9 days to pack out. I guess we really need to get busy on that sorting I wrote about 60 days out! I've written about it and thought about it but just haven't executed it so much. Next weekend is the real crunch time. In the meantime there's too many nice distractions here such as...

The palace has a public part serving as a museum for a fee. The palace is worth a visit for the free grounds, but I think the inside is a little more impressive than the Royal Palace in Stockholm. It's harder to get to as a tourist with little time, but if you're here for a few days or an entire Foreign Service assignment then definitely go see it! 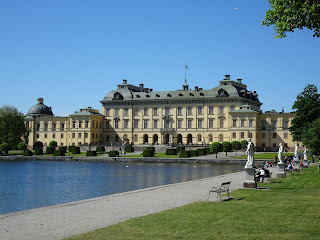