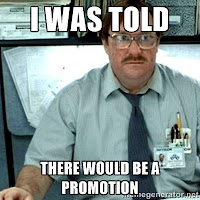 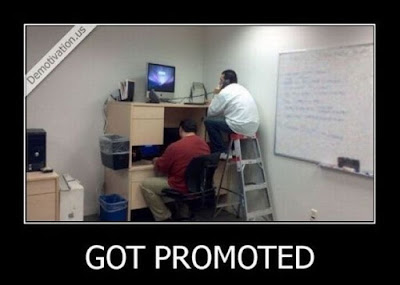 I'm promoted in 2 weeks (the pay period after 18 months of starting) from FP-05 to FP-04 in the backwards numbering scheme of the Foreign Service. All Information Management Specialists (IMS) are hired as FP-05 starting at one of the 14 pay steps based on our previous job's salary. We all get an administrative promotion to the next higher grade after 18 months. I've been in military and government service all of my life but it's been 2 decades since I've been automatically promoted when I went from Airman 1st Class to Senior Airman.

There are some basic criteria for administrative promotions:

In order to be promoted administratively, career and career candidate members of the Foreign Service in the applicable classes need only meet the time-in-class requirements and demonstrate that their performance has been satisfactory.  IMS: from class FS-5 to FS-4 following completion of 18 months in class with satisfactory performance.

Practically everyone is at least satisfactory. However, a promotion isn't entirely automatic in case someone unworthy slips through the hiring process:


At the time a member becomes eligible for a scheduled administrative promotion, the Director General may order the deferral or denial of a promotion if the Director General determines such promotion would be inconsistent with the national interest or the efficiency of the Service.  Such determinations must be based upon the procedures published in 3 FAH-1 H-2320.

So what are these in-depth procedures to make sure my promotion isn't inconsistent with the national interest or the efficiency of the Service?

It's a lot of words to say they ask our bosses if we're satisfactory. I love government policies. :-) After this it does get complicated as competitive promotions are decided by promotion boards judging us based on our our employee evaluations. There's many more pages of policy which try to make that subjective judgement into a fair and repeatable process. 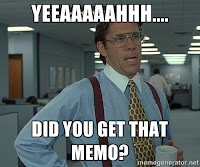 So what do we get with our promotions? Private sector pay rates and raises are more private affairs. There's usually more flexibility and room for negotiation. In contrast, public sector promotions and pay raises are well known and rigid with a specific 6% formula:

The foreign service pay chart is available for anyone to look at and that convoluted policy language tells us how we move up the chart by rounding up to the 6% higher step in the next grade. All of our salaries fit into these tidy charts instead of getting individualized amounts like a lot of the private sector. 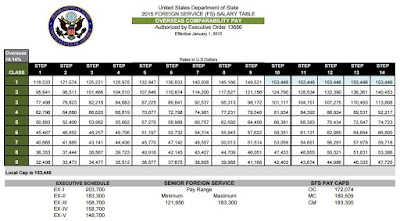 For my new hire classmates still adjusting to public service life...
Welcome to the Machine!