Birka was a village on the island of Björkö in Lake Mälaren about 2 hours west of Stockholm by boat. Birka was an important trading center with the rest of the world during the Viking Age in the 8th-10th centuries.

This UNESCO World Heritage Site was a day excursion with Strömma boat tours. The excursion included a guided tour from an archaeologist. He was both informative and entertaining as he walked us around wearing a period costume. There were recreations of some of the wooden houses and boats from the time but the town site is just an open field now.

On the way to Birka 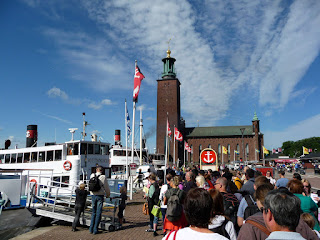 One last bit of pictures from last week and playing tourist with our tourist friends. (Yes, it was still cool enough for jackets in July) We finally went up in the SkyView on top of the Ericsson Globe Arena. We've been inside the Arena several times for concerts but hadn't gone up in one of the viewing gondolas crawling up the outside of the world's largest spherical building. It's a fun way to see Stockholm! After that we went to our favorite overlook walk along Monteliusvägen for another view above Stockholm and closer to the old town of Gamla Stan. 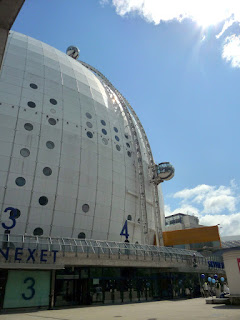 The Vasa museum displays the only almost fully intact 17th century ship that has ever been salvaged, the 64-gun warship Vasa that sank on her maiden voyage in 1628. The museum is the most visited museum in Scandinavia and is another place I visited while playing tourist in my own town last week. 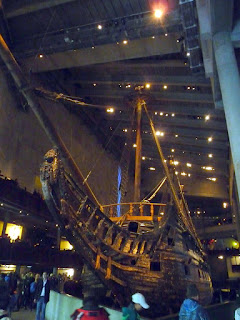 Another thing I did last week with our friends was finally going on the Under the Bridges Boat Tour. Friends coming as tourists helps us get around to doing the tourist things in our own location. We've been here a year and I just never got around to doing that one. Stockholm is spread out over 14 islands so a good way to get around and take a look at the city is from the water. We passed through 2 locks separating the water levels of Lake Mälaren with the Baltic sea. 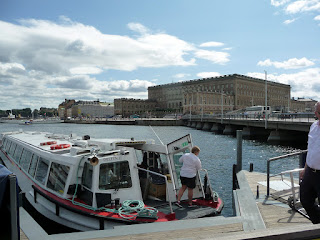 A year ago we arrived and we saw the changing of the guard ceremony at the Swedish Royal Palace. Last week we had some good friends visiting us so I soaked up some more of that royal experience you can get living in a kingdom. The changing of the guard is a really cool and somewhat long ceremony with lots of marching back and forth and a band. I already posted pictures here last year but it's interesting enough to post some more. Their marching is interesting with how high up they swing their stiff arms. I'm glad I never had to march that way because being out of step would have been that much more obvious. 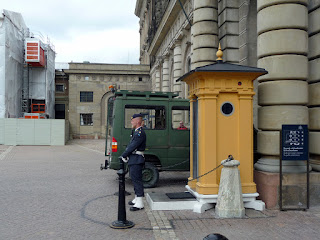 I received the individualized email from my Career Development Officer (CDO) announcing my 2nd tour. Next summer I'm heading to Caracas Venezuela! 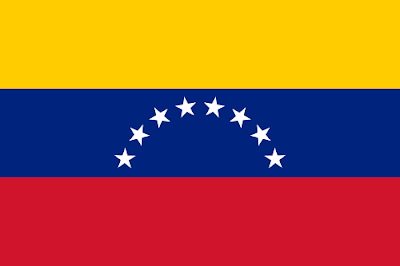 This was #22 on my list of 42 choices. It was a medium choice out of the high, medium, and low categories we had to tag on the list. It's a 20% differential post with a COLA currently similar to Stockholm since the COLA here has been dropping. This means there's a 20% pay raise to offset the somewhat harder life there compared to the 0% differential Sweden. There's also 2 R&R trips with paid airline tickets to Miami (or equivalent pricing somewhere else) for the 2 years there so that'll provide some nice breaks.

Receiving my next assignment is delayed a week so I still don't know where we end up next year. Instead, we distracted ourselves with a trip we already had planned.

We met some friends from the US in Prague for a long weekend of sightseeing, beer, food, and beer. It's a popular European tourist destination because of it's affordability and Czech beer. Prague lived up to its reputation. It was a blistering hot time made even worse by being acclimated to the much cooler Swedish summer. I haven't felt heat like that in over a year. We were forced to stop more often at the outside cafes and beer gardens for some shade and a cold drink. I'll share the rest of the experience in pictures. 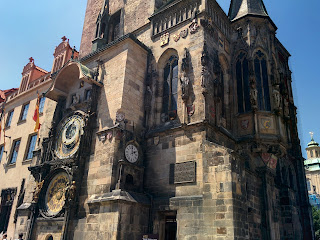